“Great new kids book alert! My two are in hysterics reading Johnny Nothing by Ian Probert (and I am too).” Jane Bruton, Editor of Grazia

“Oh, Wow! Dark, sordid, grotesque and hilarious are only a few words I can conjure up to describe this hilarious book.” Lizzie Baldwin, mylittlebookblog

Critics are comparing Ian Probert to Roald Dahl. And with Johnny Nothing we have a modern successor to Charlie And The Chocolate Factory.

Johnny Nothing is best-selling author Ian Probert’s first ever children’s book – although adults are enjoying it too. The story of the poorest boy in the world and the nastiest mother in the universe, the book is earning rave reviews. Children and grown-ups are all laughing at this incredibly funny kids book.

Take a look for yourself here!

To celebrate the paperback launch of Johnny Nothing we are offering a free Kindle copy of the book to the first 100 people who Tweet the following message:

@truth42 I’m readingJohnny Nothing by Ian Probert. #YA #Kindle #kidsbooks

The first ten readers who answer the following question will also receive a signed print of one of the book’s illustrations.

Q: What is the tattoo on Ben’s arm?

Send your answers to truth42@icloud.com

Ian Probert has been scribbling down words ever since he learned to spell the phrase: ‘Once upon a time…’. He is the author of Internet Spy, Rope Burns and a bunch of other titles. Internet Spy was a bestseller in the US and made into a TV film. Rope Burns is a book about why books shouldn’t be written about boxing. Ian has also written things for a shed load of newspapers and magazines. When Ian was a student he used to write lots of letters to the bank manager.

Bill had a shaven head and was wearing a blue tracksuit. He was almost seven feet tall and built like an outdoor toilet made of brick. Bill didn’t realise this but he was a distant descendent of Neanderthal Man. He had only one eyebrow – one long bushy eyebrow that reached right across his forehead. He looked like what you might get if you force fed a member of Oasis with a half-tonne black plastic sackful of steroids.

And if you were brave enough to be present when he took off his tracksuit you would discover that his back was so covered in hair that he was able part it with a comb. If Bill had had more of an interest in fashion, he might even have considered giving it a curly perm and perhaps a few extensions

On his right arm, Bill had a tattoo which simply read ‘Bill’. This was in case he woke up one morning and forgot who he was. This was actually less unlikely than you might imagine because standing next to him was his twin brother. His name was Ben and he was identical to Bill in every way except that the tattoo on his arm read ‘Bin’ (the tattooist was either South African or not a very good speller). He was wearing a red tracksuit.
Bill gave Mr. and Mrs. MacKenzie the tiniest of smiles and managed to grunt ‘hello’. Ben gave the couple exactly the same tiniest of smiles and also managed to grunt ‘hello’. 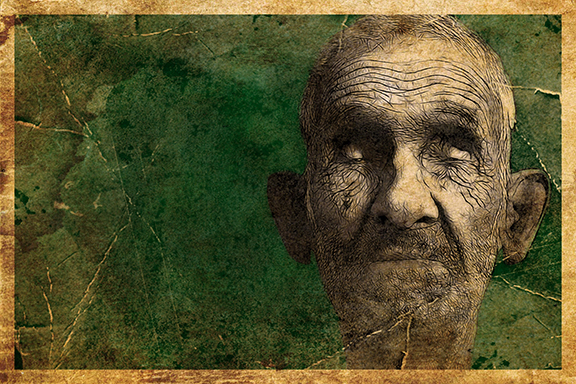 The two men were standing protectively close to Johnny. They were so large that in the confines of Johnny’s bedroom they looked like giants, which they were. They were so enormous that each of them had their own postcode. They were so gigantic that they had their passport photos taken by satellite. They were so humungous that you could spend all day thinking up rubbishy jokes about how big they were and never adequately describe just how indescribably, earth-shatteringly ENORMOUS they were. By no stretch of the imagination could you call them small (unless, of course, you were a lot bigger than them). 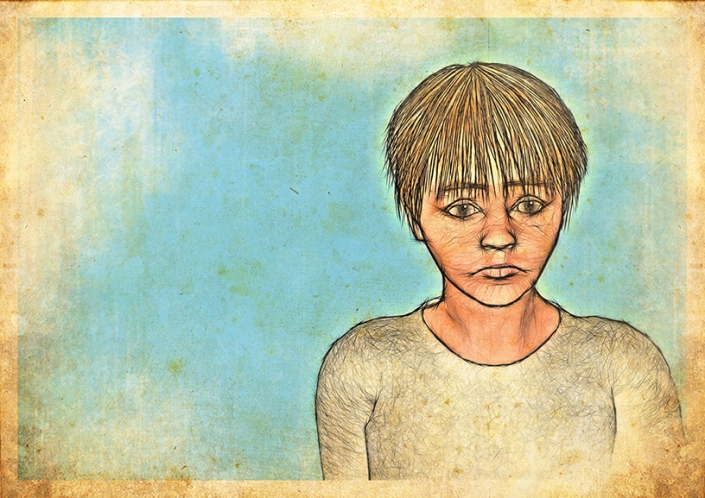 The pair of Goliaths were having to stoop slightly so as to avoid head-butting the ceiling, which actually even looked a little scared itself. They were a terrifying sight. Even scarier than a school trip to a Weight-Watcher’s nudist camp.
There was a long, pregnant silence in the room like this:

This eventually gave birth to an even longer post-natal silence, which, in the interest of preserving the rain forests or the battery on your Kindle, I shan’t demonstrate.

The four grown-ups eyed each other nervously. Bill and Ben looked at the Mackenzies like they were looking at insects that could be squashed into pulpy insect juice any time they so desired.

The Mackenzies looked at Bill and Ben like they were looking at two giant skinhead Neanderthal bully boys who had just appeared from nowhere in their recently and unexpectedly decorated council flat.

Finally Billy Mackenzie managed to get his mouth working a little and spluttered: ‘Who are you?’ And then: ‘What do you want?’
There was another long silence – let’s call it a pause – while Bill and Ben looked at each other as if trying to decide who was going to answer. Finally Bill spoke: ‘You the boy’s parents?’ he demanded in a voice that sounded like an angry rhino with horn-ache. Although if he was clever enough he would have realised that this was a rhetorical question.

There was yet another long silence (you’ll be relieved to hear that this is the last silence you’re going to get in this chapter) before Billy Mackenzie mumbled ‘Yes’.

Now Ben spoke: ‘What my brother means to say,’ he explained. ‘Is that we’ve been – how shall I say – contracted – to make sure that this young feller’s affairs are in order.’

‘Get out of my house!’ interrupted Mrs. Mackenzie, suddenly feeling a little braver, although she had no idea why. 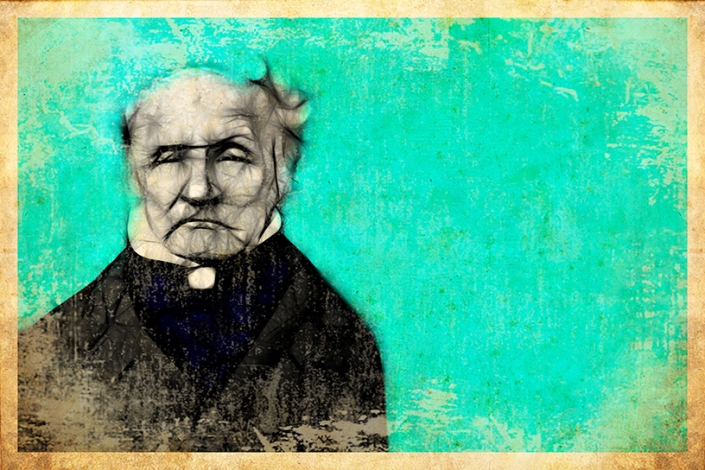 Bill and Ben looked at each again for a moment. They did this almost as much as your mum looks in the mirror. Or you dad looks at websites that he shouldn’t be looking at. ‘First of all,’ said Bill, ‘This isn’t a house – it’s a flat.’

‘And second of all,’ said his brother. ‘We ain’t going nowhere. And neither are you.’

‘Johnny who are these men?’ Mrs. MacKenzie asked her son, ignoring the two giants.

‘I’m sorry mum but…’ Johnny started to speak but Bill cut in like a pair of scissors that chops sentences into bits.

‘…What the young feller means to say is that the fun’s over.’

‘That’s right,’ continued Ben. ‘You’ve had a right old time. You’ve been spending his money like it’s your own. You’ve been ripping the poor young feller off. And we’re here to put a stop to it. From now on things are gonna be different.’

‘I’ve had enough of this,’ said Mrs. MacKenzie. ‘Nobody speaks to me like this in my house…’

‘Nobody speaks to me like this in my flat. Billy, call the police!’

As usual Billy MacKenzie did as he was told. He reached into his pocket for his mobile phone. Before he had the chance to even turn it on the gigantic frame of Bill was towering over him.

‘That an iPhone?’ asked Ben.

‘Erm… Yes,’ said Billy, who could only watch as the huge man took it from him and with one hand crushed it into a chunk of buckled metal and shattered touch screen.

‘I think it’s broken,’ said Ben. ‘You ought to take it back to the Apple store. Tell ‘em that you’re not getting a decent signal.’

‘Right!’ cried Mrs. MacKenzie. ‘We’re leaving! You’ll be very sorry you did that. I’ll fetch the police myself!’

Now the giant frame of Bill was standing in front of her. He was holding something in his hand that looked a little like a child’s toy space gun.
‘Know what this is?’ he asked. Although once again he wasn’t clever enough to recognise that this was a rhetorical question.

Mrs. Mackenzie regarded the object for a moment. Then she shook her head. Whatever it was she guessed that it was not intended to provide pleasure, happiness or fulfilment. Anything that has a trigger and a barrel and goes ‘bang!’ seldom does.

Bill stood in front of her blocking the doorway. ‘Not so fast,’ he said, not so slowly. ‘It’s called a Taser. See this little trigger at the front? If I press this it’ll give you a small electric shock. It won’t hurt you…Well not too much anyway.’

Bill raised the object and gently touched Mrs. MacKenzie on the arm. There was a loudish bang and a flash of blue neon light and Mrs. MacKenzie collapsed groaning to the floor. She was conscious but wasn’t able to move her arms and legs. 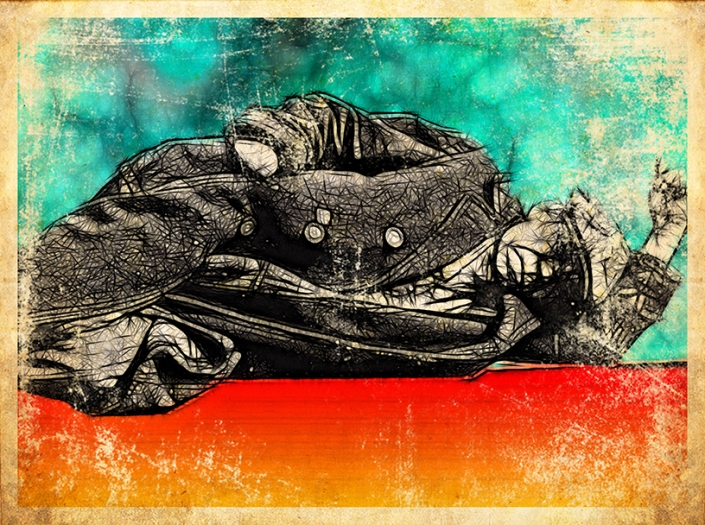 ‘Oh my gawd!’ said Billy Mackenzie bravely charging out of the room in terror. He got as far as the stairs before there was a second flash. He, too, crumpled to the floor. Bill dragged him back into the bedroom by the scruff of his neck.

Johnny Nothing got to his feet and stood over his two parents. He looked anxious. ‘Are they… Are they… OK?’ he gasped.

‘Don’t you worry yourself,’ smiled Ben. ‘Give em a few minutes and they’ll be right as rain.’

‘But they’ll think twice before they try to run off again,’ said his brother.

This entry was posted in Blog Tours, Uncategorized and tagged Ian Probert, Johnny Nothing, Kid's Books, Willy Wonka and the Chocolate Factory, YA.

11 thoughts on “Johnny Nothing by Ian Probert Blog Tour”

Reblogged this on Smorgasbord – Variety is the spice of life and commented:
Join in the blog tour of Ian Probert author of Johnny Nothing for children of all ages.. The poorest boy in the world with the nastiest mother in the universe…..

They’re gorgeous Chris! In fact this is one of the books I’m reading right now – just up your alley – I started laughing from the first page. It’s wickedly funny. 😀

Thanks for the tip, Jo. I’ve just ordered the hard copy. I am very weak willed with books but I knew better than to make any resolutions about not buying any more. I didn’t want to set myself up for an instant fail.

I’m just the same in the self-control with books department. I’m only at the beginning of this one, but it’s that kind of make sure you haven’t drank too much water kind of funny, and I’m loving it.

I checked out the start and it was hilarious. My son’s name is Jonathon and I am a fairly embarrassing Mum at time. I do the publicity and photography for their school and I’m always getting around with my camera. My son has been wearing a singlet 4 sizes too small for the last too many days with “This is no a photo opportunity” stamped on the front. I think we are going to love this book and thanks for the tip about the water. Not good with kids on your lap and no doubt two dogs parked between me and the bathroom.

I like this. No sissy baby-type book. Kids are so much more in tune with the world. Sounds hilarious and I like the art style.
🙂

Thanks everyone. Hope you enjoy my little book. Ian x

Reblogged this on theowlladyblog.